Climate change can be expected to affect prevailing patterns of precipitation with extreme rain events becoming more frequent and more intense. This will increase the pressure on water collection systems and wastewater treatment plants. Warning and forecasting systems provide necessary tools for authorities and operators to plan ahead and make the right decisions. Accurate predictions can be made if sufficient data are available. However, the greatest uncertainty when modelling the response of drainage systems to rainfall is the rainfall itself.

The standard approach is to use rainfall measured by one gauge but traditional rain gauges provide data with low temporal and spatial resolution. When using rain gauges, it must be assumed that the rainfall is homogenous over the whole model area, which may be as large as a whole city. For the prediction of potential surface water flooding as a result of extreme rain events, this assumption is not valid.

Weather radars, in contrast to rain gauges, provide high resolution data over a relatively large area, the equivalent of many synthetic rain gauges in one installation. However, dedicated weather radars are expensive. Local Area Weather Radar (LAWR), developed by DHI from modified marine radar and using interpretation algorithms, can provide high resolution rainfall data at a much lower cost. Such systems are already installed in many cities worldwide. They detect the first raindrop falling and track the precipitation as it falls. This provides accurate rainfall data with high spatial resolution, which is suitable for input to flood warning and forecast models. 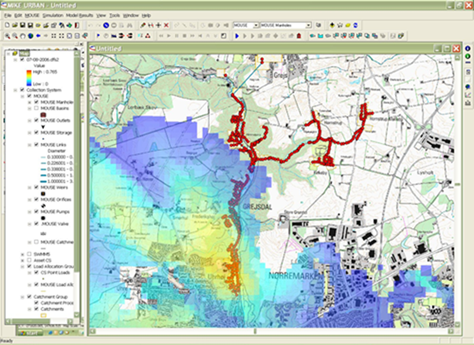 The image above shows a rain event imported into MIKE URBAN. It illustrates a classical problem - only part of the drainage system is receiving rain. If a user wants to analyse such an event based on a single gauge several kilometres away it would yield a very poor result. LAWR data provides the user with a whole range of new opportunities. It is possible to see the event move and evolve over the drainage system, and see which catchments receive the heavy intensities.