We are looking forward to welcoming you to our Spring 2012 User Group Meeting on the 20th of March 2012, and Seminar Day on 21st of March 2012, at the Lion Quays Waterside Resort, Oswestry, UK.

The User Group Meeting will include a mixture of presentations of forthcoming software features and technologies, as well as practical case studies and papers presented by UK users. 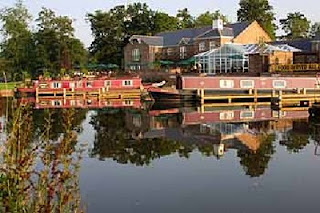 Online booking is now available via www.mikebydhi.com/Events/UKUGM2012, so get your name on the most sought after list of the year so far!

In the coming issues of our MIKE by DHI NetWork newsletter, we would like to disclose some previews of the new MIKE by DHI software package 2012, which is scheduled to be released this summer. The release will contain various new and exciting features, which we hope will improve your experience when using the software products, both with regard to usability, productivity, and enhanced applications.

Improvements for MIKE Animator in development The above example shows a MIKE 3 Flexible Mesh result file with two vertical and one horizontal slice. This new feature will allow the user to get a much better overview of large 3-dimensional result files than ever before.

In version 2011, the first step of the re-design of LITPACK was released, including the modules LITSTP and LITDRIFT. In the scheduled release for 2012, this re-design continues and includes the functionalities included in LITLINE.

The redesign constitutes an important milestone in the development of the system with regard to improved usability and integration into the coupled FM modelling system. The most obvious changes include the new user interface, which have the same look and feel as the rest of the MIKE Zero based products, including MIKE 21. Also the file formats have been changed. There will be one common set-up (pfs) file for all LITPACK-modules and the consequent use of standardised dfs-file formats has made it possible to introduce a higher flexibility when defining input- and output data. In this sense, one of the improvements included in the release in 2012 is the ability to work with an unlimited number of wave climates along the coastline, defined in a dfs1-file. Furthermore, all data in Littoral Processes FM will be geo-referenced, something which also makes it possible to display data in a graphic, geo-referenced view.

The above example shows the geographic positioning of groyne structures, with a mesh file shown as background.

Behind the scenes of MIKE URBAN 2012

Also MIKE URBAN users will notice improvements in 2012, where the new MIKE URBAN will transform the way people use hydraulic software. Be more productive and take advantage of the new, scheduled processing features of MIKE URBAN.

Currently our developers work hard to implement calibration plots and reports inside MIKE URBAN. This functionality will support plots of measured and simulated data. MIKE URBAN users will benefit from the possibility to generate series of calibration plots showing corresponding values of measured and simulated data along with comparison statistics in a tabular form. Find out more about other features of MIKE URBAN in one of our next newsletters.

NEWS: Highlights from The Network (February 2012)

The latest MIKE by DHI NetWork newsletter has been published, and selected articles are presented below: -

The newsletter can be viewed online here.

Climate change will mainly hit us first through water. In order for societies to prepare for this, the global challenge is to reduce the vulnerability of natural and human systems. There is a rapidly increasing need to create adaptation actions in order to manage the effects of extreme water rainfalls, heavy storms, droughts, etc.

Together with clients and organisations worldwide DHI has for decades been developing solutions for climate change adaptation. We have now compiled our comprehensive knowledge and experiences in three Climate Change Adaptation Guidelines. They give a state-of-the-art overview and also describe in detail the methodologies to be used to achieve sustainable climate change adaptation within the areas of Water Resources, Urban and Marine.

The guideline for the urban area describes for example how flooding from the sea and from drainage systems can be countered in cities. Tools and methodologies are described and evaluated and so is the planning of flood emergency preparedness.

The marine area guideline describes the climate change impacts on water levels, waves and temperature. You get methodologies for preparing marine infrastructure projects and for developing sustainable solutions for harbours and coastal cities.

It is vital for the future survival of many societies e.g. in Africa to achieve sustainable climate change adaptation within water resources. But how can one evaluate the impact from various CO2 emission scenarios and transform them into impact on precipitation? This is just one of the difficult procedures described in this guideline.

Climate change guidelines for your use

The three guidelines are all available for public download. Please feel free to share them with your colleagues and friends. The guidelines can be downloaded here: -
The guidance is also available on our Scribd channel here.

Through this initiative, it is our wish to increase DHI’s contribution to a sustainable adaptation to climate change. For further information please contact Jacob Høst-Madsen, Consultancy Director, DHI.