Implementation of the first parts of the Flood and Water Management Act 2010 began on the 1st October 2010.

In conjunction with the act, the Flood Risk Regulations 2009 have been established to implement the requirements of the EU Floods Directive in England and Wales. These regulations outline the roles and responsibilities of the various authorities consistent with the Flood and Water Management Act and provide for the delivery of the outputs required by the Directive, specifically: -

Preliminary Flood Risk Assessments (PFRAs), which will allow the identification of areas of potential significant risk (required by 2011)

Flood Risk Management Plans, in order to identify how significant flood risks are to be mitigated

The Environment Agency will also be required to develop a national strategy for the management of coastal erosion and all sources of flood risk for England.

The act enhances the role of local authorities so that they take on responsibility for leading the co-ordination of flood risk management in their areas. Local flood risk includes surface runoff, groundwater, and ordinary watercourses

The Flood Risk Management (Scotland) Act came into force on 26th November 2009 and transposes the EC Floods Directive into national law and streamlines the process by which local authorities in Scotland prepare flood schemes.

It places a duty on the Scottish Government, SEPA, Scottish Water and local authorities to better co-ordinate the assessment and management of flood risk. Whereas current policy focuses on river and coastal flooding, the Act covers all sources of flooding, including overloaded sewers.

In addition SEPA will be required to carry out a national assessment of flood risk by 2011, produce new flood risk and hazard maps by 2013 and put in place Scotland's first national flood risk management plan by 2015.

MIKE FLOOD (together with its sister software packages MIKE SHE, MIKE BASIN and ECOLAB, and its full component packages MIKE 21, MIKE 11 and MIKE URBAN) combines the best science of DHI with practical and efficient tools and provides the most complete toolbox for flood modelling available. It includes a wide selection of 1D and 2D flood simulation engines, enabling the fast and efficient modelling of virtually any flood problem whether it involves rivers, floodplains, floods in streets, drainage networks, coastal areas, dam and defence breaches or any combination of the above. MIKE SHE also permits the modelling of surface / groundwater interaction. 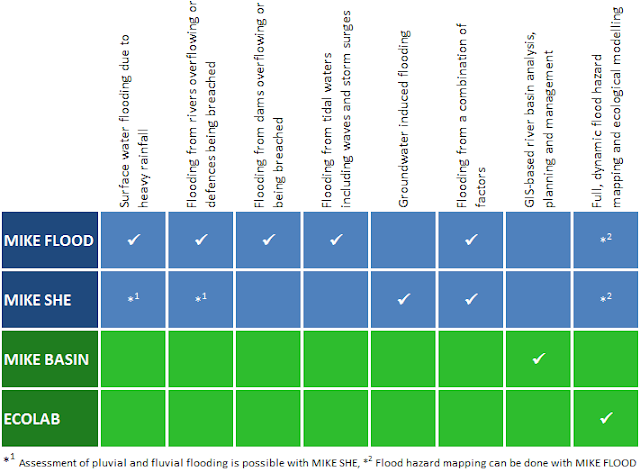 MIKE FLOOD is applicable at any scale from small developments to regional models.

MIKE FLOOD has been used extensively for Rapid Flood Hazard Mapping, providing fast and efficient preliminary assessments of flood risk over larger areas and at low cost. The assessments are typically made in simple 2D models forced by rainfall, river flooding and/or storm surge. This also creates a good basis for more detailed analyses in the subsequent phases.

MIKE SHE has been used not only to model the impacts of groundwater induced flooding, but also to model the effects of groundwater on a sub surface drainage system, and associated effects on surface flooding. MIKE SHE can also consider flood mitigation at source by modelling wetlands and riparian barriers to slow runoff into watercourses.

In a recent independent review carried out for the Environment Agency, MIKE FLOOD received the highest marks not only for speed, but also for model setup, runtimes, stability, presentation and visualisation of results, sensitivity tests and file management - MIKE FLOOD achieved the highest overall score in the study. In the forthcoming Release 2011, there are further improvements in both speed and usability.

For more information about MIKE FLOOD or the other MIKE by DHI software products, feel free to contact Steve Flood on +44 1752 691723 or sjf@dhigroup.com