Location; Environment Agency Flood Zone Map (no allowance for sea level rise due to climate change)
Bathymetry
SRTM (Shuttle Radar Topography Mission) data is available in a 3 arc-second (90.0m grid resolution) for the UK. The vertical accuracy of SRTM data can be several metres (or more!). As such, SRTM data is not recommended for detailed assessment of flooding / inundation at a particular location and has been used in this example only to provide a coarse, initial estimate of likely model extents and an approximation of overland flow mechanisms (please read the Important Information at the bottom of this page).
In this example, the SRTM height data has been assumed to approximately correlate to Ordnance Datum (OD) Newlyn. However, this may not the case. SRTM heights are referenced to the EGM96 vertical datum. As such, SRTM data must be checked and verified for accuracy. If it can be demonstrated that SRTM data closely corresponds to Ordnance Datum, it may be possible in certain circumstances to use the data in conjunction with LiDAR and physical (GPS) topographic surveys in order to greatly extend a model domain only - this is not guaranteed. However, SAR (Synthetic Aperture Radar) data may offer a more generally acceptable solution to extend a model domain [1].
The SRTM data has been downloaded from http://dds.cr.usgs.gov/srtm/


[1] See https://www1.vtrenz.net/imarkownerfiles/ownerassets/868/brochure_IFSAR.pdf for an example comparison of SAR based data (IFSAR from Intermap) with LiDAR; information on the Environment Agency’s LiDAR data can be found here http://www.geomatics-group.co.uk/

The raw data has been converted for use in MIKE FLOOD using 3DEM by Visualization Software LLC and ESRI ArcGIS / MIKE URBAN; in order to transform the horizontal and vertical planar grid resolution to 50.0m. 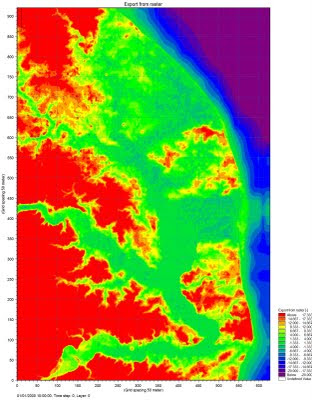 A quick search of available on-line data[2] suggests that I in 200-year extreme sea levels (storm surge levels) along the east coast could be in the order of 3.0m A.O.D or higher at Lowestoft to 4.6m or higher at Cromer. As such, the 1 on 200-year extreme sea level at Winterton-on-Sea could be in the order of 3.9m A.O.D or higher.
PPS25 requires that a sea level rise of approximately 1.1m is added to the above extreme sea level to consider the long term impacts of climate change over a 100-year design life of building (residential standard).
For the purpose of this example, from the above, the 1 in 200-year tidal flood level plus climate change for Winterton-on-Sea has been taken to be 5.0m A.O.D. This value has been taken to represent the peak of an approximate 3-day period (sinusoidal) storm surge.
Wave action will exacerbate flooding, particularly along the coast, but has been ignored for the purpose of this example. River flow will also increase flooding but has again been ignored for the purpose of this example.
The boundary conditions of the hydrodynamic model are simplistically assumed to be uniformly level. As such, a point time series file has been used throughout (see below). However, in reality, the tidal flood levels will vary over this short stretch of coastline and a profile time series could be more appropriate / accurate. 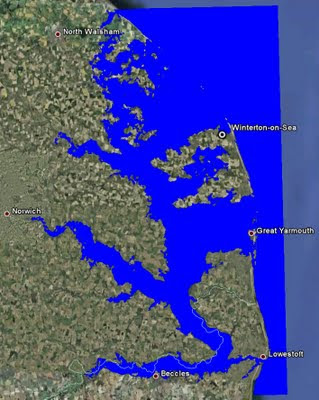